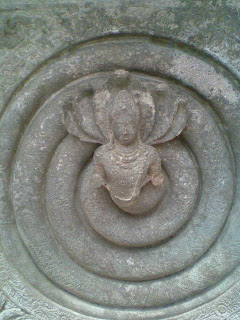 An amnesia of sorts, a type of wakeful forgetfulness, and a sort of nausea so overwhelming that it shakes everyone at the very thought of itself, it grows within you and this is the first sign of her, she unmasks herself way too soon!

There is not a single voice which can drown her silence, not one cry which will make the pain of her remembering go away and not a type of ecstasy which will make you forget her, she is the serpent coiled and now look at her , she uncoils herself, making that sickness and the very repugnance into the sweet smell of jasmine, this is the transmutation which you will undergo and this is the review which I write and which you too shall write

The sun cant predict the behavior of the seas, it is only the moon, it is not the day which can make you see silence it is only darkness, and it is not the light which liberates, it is just suffering at all ends. Words which you thought were a serpents kiss and which led you differently once now will make a clear sense to you, they hold a pattern and the visualization of what reality different notes are will now be clear. They will be very clear

Sounds which are produced without the striking of objects are now common, as you enter the hall closed by the gates intertwined towards trinity, the kind of ugliness you will see in the doorkeepers face will make you disgusted but look closer and observe, it is of you that this ugliness emerges and then you will understand the nature of things towards to you, the experience of riding the serpent now begins

She is of Darkness, and of solitude and of complete silence and of complete chaos , she is of energy and her body is composed of pure nothingness, this is the visualization of the great goddess , the great mahamaya. The Greater Kundali The coiled one.

She is like a magnet, ever existing and ever separated from the lover Shiva, the energy which holds them apart is the energy now you will use to unite, the concept of uniting a dipole is impossible even with the most occult of experiences and practices, hence you must be wise and very sober for you will now see the concept of unity and you will fail yourself at uniting , you will observe that there is always unity present and the energy now will reverse and the gates open wide

She is coiled up and it is the measure of the supreme potential energy which she holds within herself, you are her and then the night fades away, many nights the soul praises her at the awesome peak of ones ego, and then there is the fading of this night as others and no use, she is static and useless, and then tears after tears are poured to the ground and you see that she now listens to you and observe that she too weeps with you, the energy is progressing and the review begins. over and over again.

As the minutes and hours of the days countless in number pass on, there is the need in my heart to alleviate this pain of mine, by either finding something to be or do, but I cant do it, she holds a type of possession over me, she keeps me in solitude and speaks of the ever spiritual in me, and the mundane in me fades away slowly and steadily,

There is this presence of the underdone in all of the souls in this universe as if the hands which do all the work are always doing the will against the body and the mind, nothing makes sense other than that the idea of perfection is far away from us , immeasurably far away from us, too far and too distant to peruse, the idea which we first propagate to the sky comes back tenfold in its emptiness back to us and there we are left stranded in this , immeasurable indifference, but this is to change , Trust me it does

Now the snake straitens from her base, she is blinded for though she cant hear, she still senses the flute which becomes her remedy, attracted without reason and now I understand that even she wants to escape, even she wants to leave, so I ride her now , faster and more amidst it than ever before,

Life is a faded flower, far from bloom ad nearer to it being scattered towards the abyss of nothingness, we are holding on to this wave and we are trying to believe that we are on a mission to conquer the heavens , none of this is true.

When you have tasted the Land of the More, then you will realize that all this is true