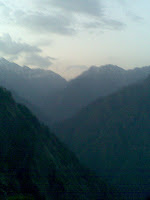 I recently went for a trek in the himachal among the power mountains, which have lasted there for millenia together. When in hills, I try to tune out and tune in. Tune out the garbage in my head and tune in the fresh energy abundant around me here and now.