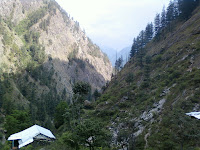 The more a man becomes aware, through reflection, of his servile condition, the more indignant he becomes, the more the anarchist spirit of freedom, determination and action waxes inside him. That is true of every individual, man or woman, even though they may never have heard of the word "anarchism" before
-The ABC of Revolutionary Anarchist.

Anarchy means without rulers. This is the same as Swami, in Sanskrit at least to me. Swami in simple terms means One
who is his own master. As in without the need of being told what to do, to live. This is a simple yet very difficult chore, In
a society where it is easy to find out through others how to do things, such as cope with depression or childbirth or suicide
and such. We can rely mostly on others to tell us most of the times what has to be done, why or why not something is
appropriate and such...
In truth, there are very few among us, who actually goto the in depth knitty gritty details of our every moment actions and
thoughts to find out what is appropriate for the individual. Mostly we take advice from TV, the Internet or even MNC's with their
bid to sell their own "unique" products. I believe in absolute conviction that one must take/undergo to try to make a life.
Please take a look at what I said, I didnt say with conviction one must make a living like everyone around you would make you
believe, but rather taking an onus to jump at the opportunity to Live.
Life is as one makes it, and if one chooses to take supposedly an easy path and take life for what others tell it is, then one has to at some
point be able to see that it is not bad to compromise. especially if one has done in the beginning itself for choosing what
their individual definition of life ought to have been.
It takes almost the entire breathing life cycle for most to find out what life or what aspect of this continuity called life they
choose to embrace and be a part of. become a breathing part of. It is as if we are born alien to life, and we search and grope
in the dark until we see that one single thing, that entity, being which we can embrace and enjoy as Life.
But I see the truth as quite separate, yes we might be born alien to life and we might have had to make those attempts
to define ourselves and what life is, but we do not have to grope in the dark. Never.. for Life is all around us, it is up to us
to see that whatever we choose to embrace, how much ever , how much ever less.. all is a part of the grand show called Life.
Anarchy has been very dear to me, An institution is fabulous as long as it imparts gently the knowledge of whoever has established it
for the propagation of Life itself. But seriously if anyone looks around in this world, we would see that an institution is the norm
as in people are afraid, mortally troubled to step out of institutions and into the unknown. The logical conclusion that most
idiots thrust upon me is the institution itself has taken so long to develop the particular facet of knowledge or life its trying to teach,
it would be ruinous not to be a part of it. Institutions such as social ceremonies, educational foundations, career and life choices and even
sex and death related customs or taboos and such.
What I always look to and think is, if the institutions or a way to inventorize something of the human realm is present, sure it is easy and perhaps
advantageous to take part of it, but these too had developed, had been created. What makes these institutions more in a position to
teach what life is to me, than my very own quest for the same. Hence the feeling of anarchy, I do give credit and respect where it is deserved
but salvation indeed is personal, it is not a mass or a group phenomenon, Living and Life is individual too, that is why the whole of
human race is not knitted together like Siamese brothers and sisters. We are to seek and struggle and finally liberate, all credit to ourselves
cause no other credit to anything or one would justify Life.
at May 30, 2009