Nature of the Word 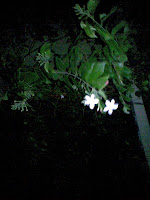 I am interested in how words and anthropology are related to some extent. The first or root words have directly expressed an idea, so that this creative willed idea, can be transmitted from one to another. Born out of sheer imagination/reality the nature of the word is an intriguing study.

In Sanskrit the word for nature is, Prakriti. Literally it means the thing which is present, one which is present without cause, out of sheer will. In Chinese the meaning of the word nature means that which happens or Is by itself. The process of recognizing nature and ones nature hence largely requires that one give up assumed control in the first place.
As one loses control, this imaginary whip. One becomes a part of the larger whole. Indeed a gifted experience with nature in full colors can induce this condition. I feel that when one is in prakriti if one acts as one is. Meaning without schizophrenic self will working with an idea of the world instilled, meaning losing the definition of the world as one has learnt or tried to imagine and rather let the moment of now itself show what nature and indeed ones nature is all about.
This is what all the religions, philosophies and societies have tried to pursue to some degree on another. When one is broken from the path of Nature and surviving with Nature. Then it is indeed a further broken road to damnation.
Nature has a will like each and every single part and being of nature has a further micro will. Will, I mean is the ability to create, as one pleases. When the collective will of nature if there is such a thing works, then it works for the evolution of its entire collective. If one breaks and tries to evolve separately then one is bound to perish.
The natural way is to spiritually mentally and physically evolve. Natures will is bent such, when men and women like me try to break away and will our own worlds, create our own imagined evolution, then what will happen is any ones guess. As today's worlds demonstrates to me at various times.
Death is also natural. It is present. It is part and parcel of prakriti. When one dies the energy remains and it is transmuted to another. Reincarnation is something of such sorts. It happens, and it happens by itself. To lose ones control, and accept death and life as our will. This is the most natural way of evolution.
I of course in my own poetic way believe this evolution is sheer play. A whim. A grand Love. What else can I look and be with nature and imagine? or create? or trust ?
Peace and love to All.
at May 28, 2009