Ganesha is the most favourable Indian god, he is now a truly global phenomenon, For he is the bringer of good fortune and giver of all boons. He is pleased easily and blesses those who come for his grace. 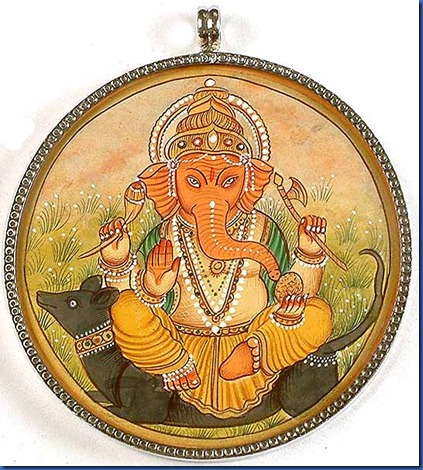 Ganesha is a gate keeper… He is the person who stands guard for his mother. The Kundalini energy present in every conscious living organism.

The myth of creation of ganesha goes such, that he was created by the dirt on the body of devi parvati (goddess energy), to stand guard while she was taking a bath, and he obeyed his orders to the fullest; not letting his father, master of universe Shiva inside too… this lead to shiva being wild as hell and beheading him, his head later replaced by that of an elephant.

The elephants head is not a coincidence in this esoteric tale.. The elephant is generally timid and wise, it remembers everything and records all memories perfectly till it dies. It is easily satiated and once mad, tramples its enemies to pulp on the ground. All are also the characteristics of the personality of the god Ganesha.

Ganesha has been made by the body of sheer energy for a direct purpose, he must be placacted first, and then he opens the gates to access the mother divine energy… of goddess Chandi/Kali/Parvati/Sati/Kula Kundalini.

Ganesha lies at the base of the spine and before any work to start; his blessings are sought, then the work so done becomes auspicious with the intent of divine will and energy..

The annual indian festivals are also devised extremely cleverly and with pure reason, with the advent of the autumn season comes the favoured and cherished ganesh chaturthi; where ganesha idols are kept in each home (made from mud) and worshipped for a period of 11 days and them immersed into water. And almost half a month later comes the most powerful time of the winter season.. the 9 days of dusshera and devi worship where there is power worship… the right ways to gain power is by worshipping the gate keeper and then following it up with 9 days of chakra worship…

Without the blessing of the gate keeper, it is impossible for us to witness and become part of the universal energy; present within us and all without. Its a beautiful way in which indian festivals have been devised, so that every human being can actually access the gate keeper, get his blessing and move onto discover his/her energy to the fullest.

Indians were not as stupid as they looked, and thankfully so for the entire human race.

Peace and Joy on this lovely Vijaya !! Dushami 2011