There are couple of esoteric representations present in world myths/symbols which I thought would require clarifications beneficial for those interested.

1) The Conquering of serpent Kaliya by Krishna:

So the myth goes that there was this dangerous huge 5 headed snake in the river Yamuna (flowing in north India); who terrorised all the local inhabitants abound. Krishna the warrior prince came over and at the behest of people went and conquered the snake; he actually danced on the serpents head to subdue and pronounce victory: 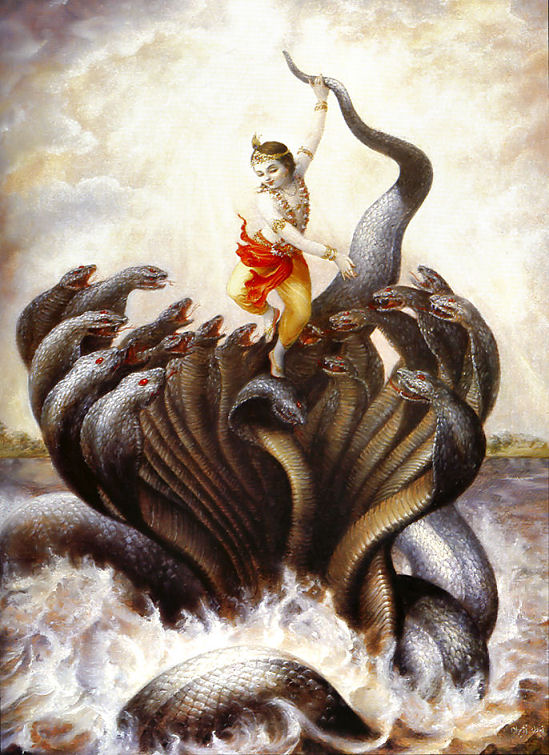 Well every mythical account in the history of human evolution has a link with direct experience of the occult (spiritual/other worldly phenomenon). Here Krishna is conquering the serpent power of his within; The serpent power- Kundalini is the ego force in human beings, located at the base of the spine; when Krishna is shown dancing over this snake; it goes to show the exact moment of transcendence (Krishna is a boy when this happens- just entered puberty/adulthood) into ego-less god head. Also the river chosen is Yamuna. In Indian mythology; ganga is representation of solar energy or the Pingala nadi/nerve which flows from the base to the right nostril. Yamuna is representative of the Ida channel- the lunar/moon energy which flows to the left nostril- traditionally Krishna worship is done via bhakti- love et all which involves the over use of ida channel/moon channel to raise the kundalini. Hence esoteric representation uses Yamuna in this particular iconography.

In Christian mythology; the earliest iconography depicts the garden of paradise where initially man and later his counterpart; woman was made. They were innocent – which goes to say that they had not experienced the sexual energy present within themselves- a state of pre-pubescent life.

So there are fruits everywhere; and on the tree of life/knowledge hangs the apple of desire and the snake comes over and tempts both of them to take a bite and revel in life’s passion. This moment for long is depicted as the fall of man from divinity into mortality.

The representation of the Tree and the snake is very common in almost all pre-Christian religions as well, most cases they represent something good rather than what is portrayed in Christianity. Well here the tree is to represent the spinal column (in most representations of a tree- it goes to show the human spinal column held erect/vertical unlike spines of other life forms). The snake here again is the powerful serpent-kundalini/ the individual ego force. Before the both Adam/eve took the fruit; they remained almost in blissful ignorance. As soon as they consumed it, their serpent powers became active, they became aware of individuality (which is seen by Christians- as shame/ because they supposedly became aware of their private parts). The tree is actually called the tree of wisdom/tree of knowledge of good and evil…. I believe that this myth would have been borrowed by more ancient tribes who used it to depict the route which man takes from innocence at birth to knowledge of his individual sexual energy and form which leads over time and experience to wisdom and true understanding of good and evil. The Christians haphazardly condemn the snake, which is the only way one can forget and then realize their own divinity (think about it, why we all live is to fall down from grace so we may live the hard life and realize the state of grace/god hood once more.. and so it is with the initial life forms/Adam and eve)

3) Hippocrates and the rod of Asclepius:

The most popular symbol of medicine (the only one too) is the mythical rod of Asclepius which is a snake intertwined along the staff. The other most commonly used symbol; is the rod of Caduceus (both borrowed from ancient Greek myths)… the caduceus is similar to the former, but has two snakes intertwined instead of one (it is seen as the hand of mercury; the communicator). 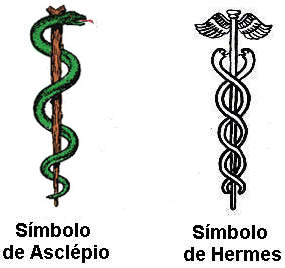 --The above shows the rods of Asclepius and caduceus.

There is a profound difference in both the representation. Again to do (you guessed it) with the serpent power (hell these are serpents depicted!). As I said, the base of the spine- which here and most other human myths are represented by an erect staff- which (as I also said before) represents the erect homo sapiens spinal column.

The Caduceus represents the major two nerves/nadis which flow from the base of the spine-muladhara to the top till the nostrils… and clearly you can see that the snakes end before the wings depicted, because the wings are the seventh seat of consciousness- sahasrara. Which depicts flight from the human to the divine! and is located above the head.

The Asclepius is showing a single snake- this is not representative of a nerve and rather it shows the real serpent/kundalini/feminine ego power ascend from the bottom of the spine to the top of head.

Now you ask why the Asclepius is shown to be the symbol of medicine (it was the staff of Asclepius). There are many explanations but the central esoteric one remains that the key to good health is the rising of this ancient and only force of the universe, and in turn all diseases which rise are due to the self power being hidden or inactive. The true disease is ignorance, manifesting itself through the mind which affects the entire body. The key to perpetual good health and longevity is in the awakening of the self power, upwards through the meru-danda (the stick of meru! or in this case the stick of Asclepius!-the spinal column) and dissolving the illusion.

Time then to look inwards. Time has always been such!