The Birth of Change

There seems to be a great deal of change happening in the inner psyche of this self in recent times gone by. The world and how it has formalized in my head (as in everyone's head post puberty), is now not the same. I have started to see cracks in this so called reality. There seems to be funny things happening all the time, and I sensing them somehow fall in the middle of them every time  It is not all bad, it is a clear learning taking place by the subconscious for the satisfaction of itself. 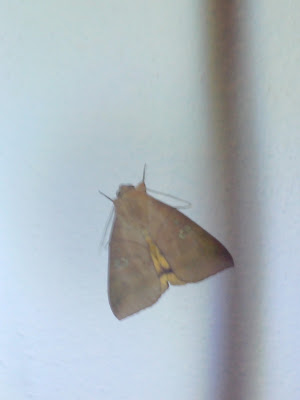 Recently I saw a very beautiful and grand looking moth in my bedroom. I have seen many moths in the past, they symbolic of beauty and serenity not to mention peaceful existence. But this moth was bigger somehow for an insect of the subcontinent. It was yellow in its wings and I could see its pretty antennae. It was perched on my drapes right near my bed, especially near where I put my head down to sleep. I was mesmerized and a little eked how such a big moth was inside my room. I adore them but somehow I get a little freaked with insects which can somehow come near my face.
So this instinct made me move the drapes a little and the moth promptly flew off onto my jeans and doing rounds on my other stuff. I was enjoying seeing it fly and I was now very comfortable as it was not close to where I put my head to sleep. I could never hurt such a pretty creature, especially a totem of power and change; and now at a close yet safe distance I could see it perch in peace and power. It was a beautiful sight indeed.
I slept off and the next day evening, I decided to go for a run in my neighborhood park - KBR. The place is a forest park at the center of Hyderabad  Though it has no significant flora or fauna but it does have some greenery (more than any other place close by). I started with my jog and mid way through a big moth flew in front of me and unlike most other times, it actually came on my face and kissed me on my lips before flying away. I got a sudden shock yet did not stop from running  but in my head what had happened was very clear and I felt quite a sense of awe.

I tell you why I take a visitation or even a pecker from a moth so seriously. Animals across time have been seen for what they really are, representations of a particular mood, aura or power. The moth is the representation of psychic awareness, ability to metamorphose, to change, and to create sensitivity. The presence of a moth can indicate the presence of these qualities in one's life or the sheer absence. Its upto the person to see which is true. The times I have been visited by a moth earlier in my life - have been times where my psyche has evolved or rather changed for one way better or worse? The times where moths have been spotted by me - have gone to show me that there is greater meaning purpose or awareness around than I had expected.
The same has been true for myself over the past couple of weeks or months, there has been continuous evolution of what I have perceived as staunch reality; the natural awakening or change to know or realize that this is not so.
The moth is a nocturnal entity, driven by lunar light. There is a sense of coolness, calmness and being ness associated with this beautiful creature. It projects no hatred or even animosity to any other life form, the female of the species has a particularly strong pheromone to attract the counterpart. It is according to me one of the most precious, and least understood animal totems and life forms.

The incident is small, and with not much consequence in day to day reality. But to those who seek efforts to purify and reconcile. The presence of a moth is delectable indeed.