There is this conspiracy theory - that we humans have been visited by alien entities from heavens (or other cosmic entities  in the past. That earth has been the breeding ground for space ships and alien gods which have come to show various sights and wisdom to the primitive people living here.

The beautiful thing about this is - that these alien gods of ours (look within any religion or culture - annunaki/egyptian/indus/mayan/incan what not) -> they look just like us! They have 2 feet, 2 hands or more in some cases, and generally a human or animal (therianthrope) looking face - which can be a mask or such. But the nose/mouth teeth/forehead - all marking a clear resemblance to us! 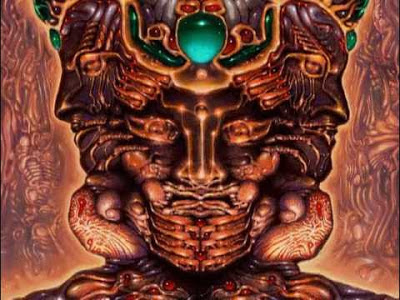 So if there was alien life in the universe, advanced more evolved - I am sure they did not have to evolve under the same conditions which we have. Life forms can be nitrogen/anti carbon based as well. It is only our short sight that we think life has to be like us and not any other way.

So what came to me was that - what if there was intelligent life forms in the past which visited us were actually our own species of life forms. The various artifacts collected across the world - point to weird vimanas and space suits which these aliens wore to come here. So when you look at these ancient descriptions of what primitive peoples encounters with their gods looked like - it pretty much looks like if one of us in this day and age with our ipod and space suits went back in time and encountered them; provided them with intelligent information and ways to create wisdom? (or maybe slaves?)

This seemed pretty funny to me at first glance - our future races all genetically changed morphed coming back in time and affecting courses in time itself to create a more profound future for themselves? Sounds cool does it not - If you could go back and change the conscious intent of people through time - would you not do it, so by the time you come into being - you are completely different - with immense amount of knowledge stored in your genes without even have worked for it! This sort of time travel is unique - to change the course of consciousness with the evolution of time. It sounds pretty fine to me.

Though there remains a single problem - these entities have tried time over for the best way to accomplish this. They come to earth through wormholes (connected from future earth) and teach human beings the nature of matter and energy and even the soul. The self. But us human beings bound to our nature, do not worship or take heed from the immense rich knowledge which they provide us (all the intent full knowledge of our ecosystem and its inhabitants also are from the 'other world'). We instead start blindly worshiping what we know through our senses - the gods themselves - their digital devices (helmets/mukuts, scepters/wands, flying saucers/vimanas - their so called power and might - their physical state and of course anything else they did or could do. We do not understand their real reason of being here - to liberate themselves, by showing us the way to liberate ourselves.
This is the true interconnectedness that they talk about time over (every religion, culture, person and so forth). That we are all bound to each other - how much ever we try to dissuade ourselves from believing such.
The moment here - now is always affecting the here now in another context. Our liberation literally causes every one of our lineage and birth to liberate themselves; This is possibly what these ancient alien gods with the power to time and space travel came back/forward in time to explain.

It is our time to listen yet again; with eyes wide shut and ears intent on hearing the silence.