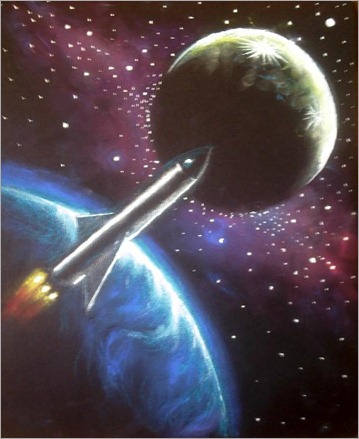 We are sitting pointed upwards, our air masks are getting fogged with the anxiety, it is not supposed to happen. But I think the count down has begun.

The engines boost and a jolt beyond my limited understanding wakes me up to where I am, I had almost blacked out, not the right time. The shuttle is shooting, upwards and the earth is trying to bind us down. Gravity is no longer my ally. The dark space above us is, I sense;  smiling cruelly. I can feel my demise.

Never ending crusade, a battle against myself has made me an astronaut. I want to escape this world, want to leave the human kind. Many have thought I should be strait-jacketed but I fooled the space committees just fine. My haven was in the unknown. The mother primordial, vast endless dark void!

But why this sense of anxiety, I wonder. What is that I would miss from the ground. feels so different not to have a ground to land back on. Feels so good and yet so weird.. I wonder what my mind was up to.

We all un-buckle, my two space colleagues and I. We are roaming on a geo-centric orbit, over Brazil or some other south American land form. Can see the vast orb that our planet is. There is nothing like such a sight. Out of space; Out of mind!

We are amazed looking at each other. There are no rules, no laws, no codes of conducts, no conformity, nothing but vast endless holy space!

Ignoring our fear triggers, we want to be. My colleagues, similar to me. Looking since our childhood for a way to escape into reality. We had finally arrived to our very own space theatre!

I could feel my head popping, something inside. A notion; an idea of ludicrous proportions had taken its grip on me. We were the first of kind zeus space launches aimed at bringing back gaseous samples from our blue cousins, Neptune and the famous planet x. Our journey would last around 4 light years. We had enough food pills to last us probably indefinitely. We were solar and electromagnetically equipped to make our own energy. And had two extra boosters for any sort of engine malfunctions. We were set.

Our days spent in isolation seemed inspiring, almost spiritual. We three talked less, and spent time near our consoles. Slept little and ate only when required. All of us extremely independent regarding our thought processes, somehow felt that we had a connection un parallel of understanding.

My head started glooming over the horizon, passing mars and Jupiter; looking at the rings of Saturn and the vast number of meteors all around. Steering clear and over three years later, we were closer to our destination than the day before!

We three played hide and seek amongst the mammoth shuttle. Lost and out of contact from anyone, we were willingly being ostracized and for what a beautiful cause!

I shared my plan with my fellow friends. A word which I could not fathom I would say. The family I had made amongst the vast unknown, even without knowing their true names, their true doings. I was one with them. That is surely life existing even amidst dead space.

I could not tell you about them, or even myself. For there is no real relevant facts which could be of interest, ashore a little ship floating on a carpet of darkness, heading to the blue planet; with no real ground for a core. I told my friends that we should not steer back, ever.

They both looked up to me, floating and coming closer little by little, they were bemused. One laughed, the other chuckled. Did they think i was out of my head? Would they sedate me till the trip was over? Did I open my mouth too soon, Should i have just done them in, and planned to go ahead myself like I wanted to in the first place? Was there any sense left anymore? Of course not.

They surrounded me either sides, they asked me collectively, what do you mean? “Not steer back?” Do you know where we are? Do you of any other place we can head to eh?

Everything had turned surreal, I was choking my own voice, and perhaps sweating first time in the past three years. I could not fathom what I had said,”No No, i was…” I couldn't speak more, i felt dizzy.

They held me firm, both my hands in theirs. They turned me around, made me look outside the window at the great planet of the underworld, Neptune and its dark sinister bluish glow.

Speaking in unison, they wished into my ears. Good job son; you see what we see. The grand magnificence showing itself wishfully. This isn’t a play on words, rather the end complete!

We rise again, this time no gravity, nothing to hold us back. Our minds have left their consoles. We are ready to be spaced out. Ready to be re born.

Our shuttle takes us further than we ever imagined. Into darker space, where we found ourselves again worthy to be part of the eternal light.

On the ground, people thought that we had been destroyed. What to say, that sounds just right from up here in space. Our former selves destroyed, and we have started anew again 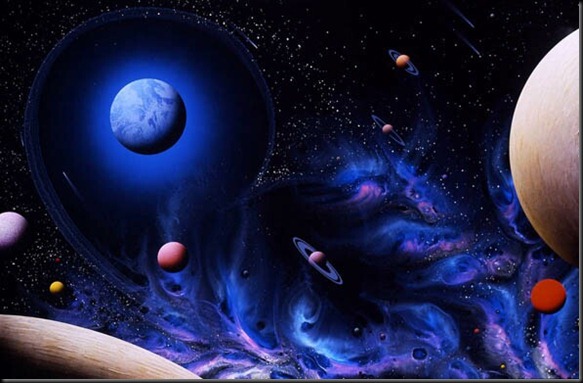