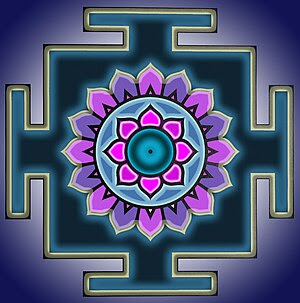 Welcome the smoke; into your home and your chest. She will sit and dispel the real from the mirage. Welcome the widow power to your life; who will be the one laughing mad on your funeral pyre.
She is horrible, detestable and the aftermath of the deluge. Where all that is leftover is the her image; the holy pervading smoke. Welcome Ma Dhuma~vati into your heart and mind.
Dhumavati is Shakti in the absence of Shiva. Her husband is dead to her; She walks an old woman in the smashan, every pyre emanating smoke is a praise to her eternal free energy. She is dangerous no doubt; called alakshmi; she is not invited into the homes of householders; for where she is, no other force of nature can ever be.
She is protector to the warrior; The shower of the path towards eternity. She is fierce and old; haunts those places which no one else ventures towards. Places of dissolution where what is left is smoke (the intermittent between creation and destruction). Dhumavati has no followers; only adepts. She has no temples; only places of consciousness-alterations. She has no form; only ethereal smoke. 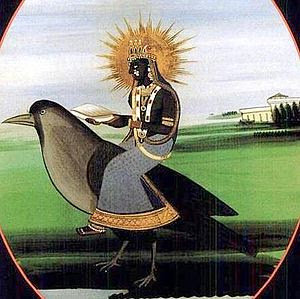 She is cursed by householders and asked to leave, yet she is the giver of boons and those who follow her path, leave everything material; Needs and wants disappear; though i admit its a very very hard path indeed, she is pleased by absolutes only. No intermittent emotions or states allowed. She is primordial power beckoning within each of us, to turn ourselves into smoke.
She is the smoke which escapes when sati is burnt at the yagna (of her father daksha). She is the brute force of anger and hatred and dissolution complete escaping from such an incidence. When shakti is fire powered; the first and perhaps last signs of her in such a state would be Mata Dhumavati.
She is dark, haggard, old and wicked in appearance. She rides a crow; The crow is her charioteer as well as her symbol. She haunts wherever smoke is present. Especially places of death and loneliness where energy whirlpools and stagnates. She is always hungry and thirsty, looking for strife and anger to appear. She is pale and tall; thin and malnutrition ed and has dark pores for eyes which will cause fear to reappear if you dont pray to her with humility; She laughs terribly, holds the skull cup with wine covered in smoke and surrounded with the recently departed souls of the smashan, she crushes bones and skulls and eats meat and drinks wine, she is all things which are transcendental, beyond boundaries and are shunned by the rule abiding little thinking householders, she represents everything; the right hand and left hand paths. She is the angered distraught restless mother of all.
To please this mother who walks the universe alone; propitiate with her element; smoke; incense; and visit places which offer respite from the householders existence. She is considered unlucky; but only to those who fail to understand what she stands to offer us in return. She is the divine widow; the energy without the consort. The raw potent latent destructible force of the cosmos.