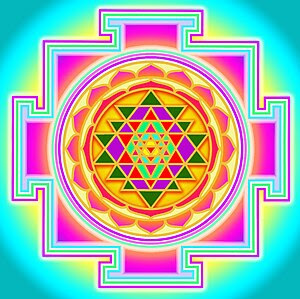 Tripura Sundari is the virgin parvati. She is the sixteen year old goddess of the forest who is looking for her eternal partner sada shiva. She is pure, and filled with divine light. She is beyond satvic tendencies (I mention because many consider her the embodiment of sattva; but her energy so pure is beyond any tendencies).

She is also called sodasi (the virgin beauty; the embodiment of desire, sensuality, beauty, grace); She is passionate. The word itself means the beauty of the three worlds. (three worlds can be interpreted as internal worlds). She is the embodiment of the shri yantra, and her knowledge is called shri vidya.
I have worshiped goddess kamakshi (my kula devi); where sankaracharya had worshipped a thousand years back in kanchi (south india); and I must tell you both her symbolic form; the yantra and her physical given form are way pleasing to senses and the soul. She is perhaps the only goddess in maha vidyas; who combines the pleasing grace of the fierce goddess durga and the love of goddess tara as a mother and also the dark energy of goddess kali. The worship of tripura-sundari is eternal and its ever fresh.

She is holding in her hands, a goad; noose; sugarcane and flowery arrows, sitting in meditative position with one leg on another, she represents epitome of the exotic/erotic/sensual desires of the mother; as well as the control over them. One who worships sodasi; is every youthful, is every attractive and passionate in life and beyond. No harm comes in the form of stagnation, for where the virgin mother is; creative renewal is a constant! (the dichotomy intended)

She is red in color and is magnified wherever such color manifests, and is present in households and in places where creation manifests; I say this because tripura-sundari is representative of the energy which is about to begin. The virgin mother is the latent sexual power to create and procreate. She is also without a consort; and this goes to show that though she might be benign; she is still power without an equal (in terms of consciousness-power). She is waiting for the master shiva to marry her into union. She is awaiting the birth of creation itself. She is known as lalita and raja-rajeshwari in many parts of this country as well.

The kamakshi temple in kanchipuram; is a special treat in stone indeed (as i have mentioned time before on the blog). The navel of sati falls here and hence this is treated as a shakti-pith (the center of the universe/cosmos- as the navel represents the center/stambha on which the cosmos revolves...apart from the fact that the navel is the most sensual/desired and beautiful part of a woman). The goddess here is virgin tripura sundari, who is waiting for her consort Ekambreshwara (the name given to shiva-consciousness). There is also the presence of a tree (which is said to be thousands of years old); a banyan tree who was the witness to this holy union of power and its equal consciousness. The pith here (shown as a circular pit in front of the goddess-in the photo); is where the shri yantra is located and worship is done only to the occult symbol. If one hasnt witnessed real love in one's lifetime (and i do mean real love; not passing squandering of energy), then its assured that one sight on this beloved beautiful dazzling goddess (though made in stone) is enough to pass over to the divine side of life.

Goddess tripura-sundari is worshipped with the lalitha-sahasranamam- a thousand words of praise to the divine feminine (in all rupa/forms). There are many references to this beautiful young and youthful goddess in this; called through various names (sodashi/lalita etc).
The goddess is a young child; sparkling eyes doe eyed and radiance of a thousand suns surpassed. She pleases one and all of her devotees by giving them uninterrupted; every desire possible; by every means required. She is desire and the mother of desire. She is the giver and the taker of such desires. She is innocence personified and beauty exemplified. She is devi whose single glance shall turn us into innocent children of yore. She is the mother;staring into whose' eyes shall bring loving eternal grace and beauty into each and every action we have or are going to perform in lifetimes ahead and beyond.