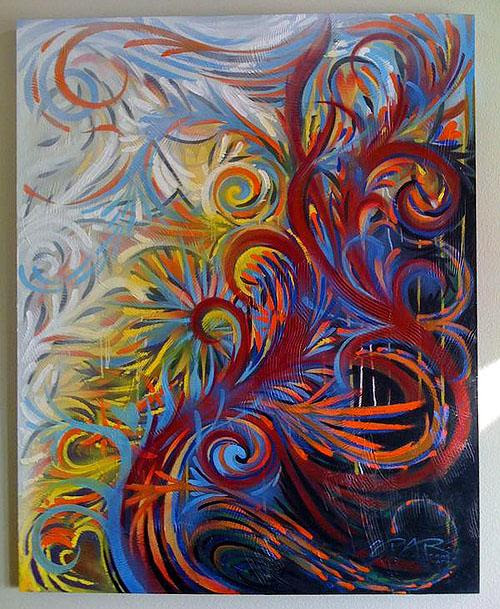 An analogy to be considered, its not mine (as in i havent come up with it) but eminent scientists and Psychonauts over the last generation have taken it up.. i thought its a very interesting comparison.. hence,
Compare your brain to a Tele vision set, a tv picks up a particular frequency and hence you can tune in to a particular channel. Lets call this channel a common frequency- free to air; so everyone on this planet can see it, and its free to; like doordarshan and hence everyone automatically tunes into it. Ignorant and pretty lazy creatures that we are; we arent really gonna think that there are other channels on this brain set of ours. So we go through our life (at least the most of us), with one channel attuned and taking for granted that everyone else is also on the same program of the channel and its all fine.
The analogy is that the brain can attune to a different wavelength together, but even before this consider cases of alcohol or chemical interference, emotional and psychological disturbances which go to change the color; sound and other characteristics of this free to air channel... We all have undergone such transformations, simplest being a heart break or winning a marathon (or anything else), it makes the channel way more dull or way more interesting depending upon the receivers 'mood'.
Now for millenia together Psychonauts have contemplated in changing the channel all together, sometimes you dont even have to have that intent and the channel due to some contingency changes the channel and your brain starts receiving different inputs (or a different audio-visual-sensory channel), Comprehensive scientific tests on rational/sober people in 1990 with a psychoactive chemical DMT; has produced such results, when injected or provided with dosage of this chemical, patients dont so call hallucinate, for a period of 15-30 minutes, they just drop out of the current reality channel and attune to a collective channel, a hallucination is not reality is the undercurrent of Western science and medicine, but a mass hallucination is a reality like the current one of ours, when scores of people take DMT and approximately tune into the same channel and there are oh so many of such channels, then it becomes very imperative to ponder what is reality and what exactly is fantasy.
The new paradigm is shifting towards acknowledging that the human nervous system along with the brain dont act like producers rather, they behave like eliminators of the different frequencies of reality which exist, perhaps this is for collective survival of the human species, but one and only one reality cannot be imposed on humanity. For reality is varied and is present in multitudes (it is not just function of sensory elements in the body- but the brain plays the most important part... as in; what i mean to say is that reality and the varied versions of it are not just due to the senses, reality can be sensed by the brain itself, it is first and foremost sensed by the brain and then interpreted by the senses)
The TV channel that humanity has been watching for a very very long time has been boring and seditious, it focuses on war and hunger and material comforts. There is no variation; and without it the brain is dying one moment to another. When we can change the TV channel, why not our perception of ultimate reality.
And i assure you that there are more realities than you and i can ever fathom in our philosophy!
Peace
at February 22, 2010