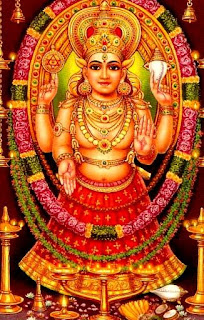 Recently I had the blessings of Devi –> which made me travel to the calm island land of Cochin in the state of Kerala, though I had gone on work, I took out some basic time to visit one of the places which I have wished to salute for a long time.
There is a powerful temple near the Cochin airport called Chotanikkara. The temple has helped me out way in the past, time where I was under depression of the existential sorts – and goddess gave me the power and wisdom to overcome (that is another story though). This was more than a decade back and I had wished to come and see the power place. Thankfully Goddess came to my rescue.
Post my work, Before leaving for the airport in the morning I detoured to Chotanikkara, it was Nava-ratri time and these are the special times for goddess where she is prayed to as protector and destroyer of evil. There was intense prayer happening with the small idol of beautiful Devi being carried around on an elephant.
This temple is known for its supernatural powers – legend has it that the place was surrounded by ignorant spirits. The goddess was found by a farmer in the middle of a Smashan Ghat (This is a regular occurring event for finding goddess energy in India)
The farmer was a devotee and soon a temple came about – the goddess is three fold – Saraswati / Lakshmi and Durga. This is the unique feature about her worship.
I was already pretty emotional and the crowd of diviners and semi mad people dancing in trance in front of the elephant to the hypnotic beat of drums wasn’t really helping. I soon was in semi tears – kundalini associating with this beautiful place and the feminine life giving and taking energy which has been settled here. I went around the temple circumambulating slowly with the crowd feeling the power of Mother seeping in slowly and surely.
Though Devi is not locationally bound at the least, there are places in the country and indeed across the world where natural energy is at its best. Especially temples in Kerala for Goddess worship – where prayer is done through Tantra – using mudras / mantras / yantras and blood sacrifice along with formulae to awaken the latent potency of the Kundalini / Gaia.
The original energy was of Vishnu and Lakshmi and further legends state of idol of Fierce Bhadrakali also being found in a lake nearby. There is indeed two devi’s here in the temple area. One is the main goddess – who is more or less the trinity goddess and is worshipped for more Satvic causes than rest.
There is also another temple nearby – She is the Kava Goddess – or interpreted as the Goddess who resides in the cave/cove. There are dime a dozen coves in Kerala – places where energy resides – stagnates – whirlpools and is generally easily found to pray to. I went to this temple and found reminisces of both Sri Yantra worship and Sudarshana Yantra worship.
This is truly one of a kind – as both yantras / mantras are found with different deities mainly goddess and Vishnu as their benefactors. Yet this was one of the few, if not only place in country where the Goddess was being worshipped with both.
I was overwhelmed and took time to pray and see the place as non-judgmentally as possible (indeed a very difficult task). Removing the two eyes and placing them at the feet of goddess, I found refuge with the third eye witnessing devotees of the goddess dancing like mad folks in ecstasy. Not the first time I have seen such scenes to the beat of the drum, but to the power of devotion – indeed a very moving scene.
I took time to meditate, pray, cry and rejuvenate. Indeed a place where the old can be discarded and the new can be embraced, where the old is let go with love and respect and the new is embraced with acceptance and joy. Where the present is what remains all – time.
Goddess Chotanikkara was beautiful to say the least, powerful majestic regal and oh so kindred. I was her insignificant child – gone astray – who she helped so many lifetimes and once again. To call me home, not on land but with the help of tears which made me let go of the negativities and ego constraints I was holding on to. Making me freer, simpler, humbler and lovelier fragment of her exuding sensuous existence.
I was refreshed; to say alive in another way, even a little time spent in chanting and praying to her alleviates all misery. This I am very sure of. Om Namoh Chandi.
Wishing everyone a beautiful Nava Ratri!