The Flight of Mighty Eagle 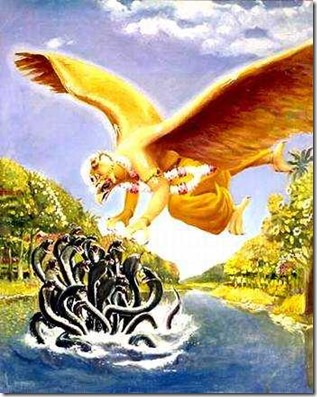 The mythical bird of ancients – the mighty eagle / Garuda. For a long time I have had a tough time understanding why the animal has the status of a demi god in Hinduism and many south American shaman societies.

Garuda is representative like most gods – to indicate a particular constellation in the night sky, he also is the eastern counterpart of the  Phoenix symbolism to some extent. But why such a great fixation on the bird in the first place?

I understand the esoteric significance of the animal totem – which has wings – for it symbolizes flight – and of course physical en-lightenment and metaphysical freedom from the body. But why exactly is it given the semi – divine status?

Garuda is the enemy of snakes – it will kill the demon spawn of earth. But in most religions – the snake itself is an animal totem which is very heavily revered – from Hinduism to tribal/pagan religions; snakes are considered wise and in tune with nature. Then why is this other totem attacking and destroying another.

Then one day it finally struck me; it seemed to be so subtle and so cleverly designed – the bird is the higher nature of man; of spirit. The snake representation is the lower.

Energy in beings is called in sanskrit as ojas. Ojas is sexual and spiritual energy. When in lower or base centres it is represented by a snake; the snake holds poison in it – which can kill the being through polluted thoughts; squandering and wasting of the precious energy. This is the reason why adam and eve in modern Christianity are told to be aware of the snake – as it will tempt you to eat the fruit of passion and knowledge; which will enslave the energy to lower centres of consciousness.

The snake is devoured whole – when the energy rises to the ajna chakra – this is where the soul takes flight with omniscience and omnipresence – indicated by ancients who experienced it first hand – in shaman iconography – it is represented by an infinite big eagle – which devours energy of the universe through its beaks and lets it out from its wings. It is mighty to behold; and mostly when seers can witness this mighty intake and retake of energy – they are blinded forever in eons. Nothing can save them unless they tread very carefully.

This is mighty violent and massive energy symbolism. The snake represents the individual and localised energy sources – which when rises higher and higher somehow gets converted to refined consciousness (refined power!) This power in turn; is eaten up by the eagle – the mighty garuda! Its food is the consciousness of the universe. It eats it; devours it whole and throws it out once more.

This is the mighty cycle of creation/existence. Nothing is left out; the Eagle is god indeed in energetic terms. Maybe it is something which the scientists have not paid heed to till date; maybe its something elusive which hides in plain sight.

The eagle in Indian and south eastern mythology is placed at the highest of all totems – though it is the guardian and vehicle of Vishnu – it is not an unintelligent animal – it is far more than a normal eagle – it has intuition and ferociousness to destroy enemies (of ignorance), something is still amiss. For it is not like an animal at all. It is perhaps a species unto itself, something which is not of earth; something which has flown from the heavens of beyond; right unto the lap of earth. Destroying the base-ness of earth centric life.

Freeing us to join it, to taste the nectar it brings forth atop the ajna chakra *third eye*

(It is an awe inspiring symbol – giving perspective above and beyond what is necessarily recognized, of patience of perching and seeing life pass by, of striking when the opportunity is hot and ripe. Seeing what cannot be seen in day to day life!)