The life everywhere is one. It is one for it is bonded by the life force. The life force (prana) is the breadth. The breadth blends with blood. The blood is the elixir; sustaining and propagating life.
The Senses wander. The illusion deepens, and lo! my mother arrives, She is brighter than light. She is stronger than will. She looks over in compassion, and cuts of her own head.
I am fed the blood of my mother, outpouring after outpouring of life sustaining blood pours and gushes out from her decapitated body, it is the pure life sustaining power that I was devoid of in the first place!
Chinnamastika is the fury, she is the storm. She is annihilation of desire and all that is wrong. She steps forth to protect those who have given themselves up to her. She is the true mother who feeds her devotees at the cost of her own self!
She holds her pristine head in her own hands; and her other hands holding the cleaver which releases one from the illusion and bondage of the mundane. She blesses all with the boon of everlasting life and power. She protects all those who have given their faiths over to the cosmic mother.
Chinnamastika pours forth three streams of blood. Its esoteric interpretation. The three streams represent the three major etheric nerves coiled around and inside the human spine. The Ida; Pingala; Sushmana.
These are the true channels that carry energy, power and the will to life in the body. The center springs forth from the mother herself. In the form of the nucleas- she is kundalini mata. Where everything begins; coiled around the svyambu linga 3 and a half times. This is mother benign and as she springs forth and upwards, she becomes the strength beyond measure kinetic energy- Ma Chinnamastika!
Chinnamastika lies above the sexual union of kama and rati. They copulate and spread their energy within two bodies – the using of sexual energy to convert it to true spiritual power- Ojas
She is both the giver of life, and taker of life as well. She is strength and force of the abstract giving itself to life. The spiritual energy which coils and toils and descends to create man. Then only to ascend and unite to destroy all that has been created. She is the example and metaphor of the cycle which is Life and death.
She is prayed to before war, confrontation and death. She is angry, and she will kill herself before she kills us all. What a daunting and dangerous iconography. What will required to worship and pray to such a deity!
She feeds Dakini and Varnini, who are hungry for life. She is compassionate in her anger, she feeds herself to give to her devotees. She will consume herself within us (our own bodies), to feed true life in every warrior who undertakes the process of self actualization and realization.
She is redder than a thousand burning suns, she is covered in her own blood too, her decapitated head looks hauntingly at our souls, piercing ignorance and drowning it in an unending hole. 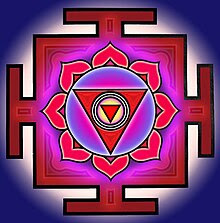 Chinnamatika Yantra (downward pointing triangle in red hue)
She keeps poise par excellence, her leg crushing lust and burning the ignorance of separation from paramatan. She has snakes as necklaces. She has skull caps as ornamentation; My mother is fierce, with fangs and lolling tongue. Her decapitated head laughs and roars at man’s ignorance. At man’s futile efforts to elude death and true life. Her sight will redeem those who can see her!
She breeds the spirit of bravery and courage. She is the true warriors goddess. Present in all places where there is fear, death, malignant energy and demise. She feeds on dark energy untold, only to convert it to the life energy blood and spew it forward towards her devotees.
She is the self sacrifice which heroes undertake. She is the caring loving mother to her devotees, she is the energy untold. She is the interconnected cycle renewing irrespective of space and time
She is the epitome of left handed worship, which requires extreme vigil and discrimination at all times by the warrior. She is the mother of vama marga
She will cure all maladies related to blood and body. She will restore vigour and virility. She is symbol of continuous sexual union. She is the fountain of Soma. She is the fountain of Ojas. She is eternal Life. She is eternal Death

Pray in silence, Pray sincerely to the definition of sacrifice. To mother who cares like no other; Pray and you will be saved. Pray and meditate and you will also be decapitated as her.
Raise your glasses, filled with the holy elixir which is blood. Your Blood.
Save it till the time is ripe. The night is holy. Bathe now; In your life force.
Renew and Restart. Life becoming the longing night spreading death revisiting itself to eternal Life!
peace
at November 19, 2010