The fear of someone eating another in this day and age (and of lore) is very real indeed. The north American tribes have a legend of ‘Wendigo’ which describes what happens when a person turns cannibalistic. 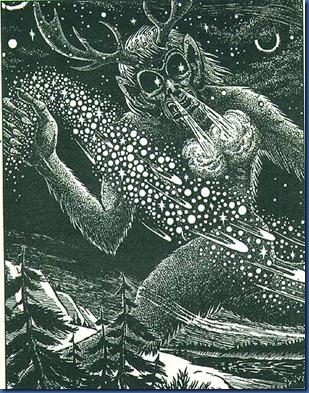 A wendigo is kind of a ‘Rakshash’ or a ‘malevolent spirit’ who looks angry distraught unkind emaciated always on the prowl; present in regions where its too cold and the land frigid and barren. He prays on human beings, and the more he kills; the more he wants to kill. For he is unlike an animal which hunts only to satisfy its immediate hunger. A wendigo is ever hungry, not for food but for the kill and of course human flesh/innards.

The myth is propounded as a cultural orientation- that the tribes used it as a strong message that no one ought to eat another even when the going gets rough- during times of famine and heavy snowfall. The message is that death is better than being a wendigo- which has greed and gluttony as its saviours. A wendigo shall never wither, unless it be killed or die on its on accord. The wendigo is a powerful anti-human. It shall survive on human meat.

But apart from the cultural aspect, what I am actually interested in is the actual aspect of when and if a person does start consuming human flesh; what happens to him.. do not mistake me for some sort of cannibal. I am a vegetarian and I abhor mindless killing (even of plants) for the sake of hunger. I have intuitive understanding that when one consumes another living conscious being (after recently being killed), they absorb the energy patterns of the other being. This goes to say, that when something/one is killed and is consumed for the matter of consumption; more often than not the being which is killed knows the reason for its death (in death are no lies). The being might choose to be agonized or curse. The energy now being consumed literally by the hunter affects the beings thought process- again a matter of energy to me.

So if someone consumes human beings- the most conscious of all the beings when it comes to certain aspects of consciousness- this might cause unusual increase or change in energy pattern of the hunter. It might cause the person to become addicted to human flesh- (many aghoris across the country are similarly addicted to this source of power)- and a hunter who does not know how to control or use the excess power/energy of the flesh might actually fall prey to the fate which ‘wendigos’ supposedly become.

The greed that man possesses is notorious in the animal kingdom. The true irony of the tales of lore are that they suspect man of being greedy enough to destroy even his own kind; you might say that the nature of hunger is such. I tell you that the nature of man is such.