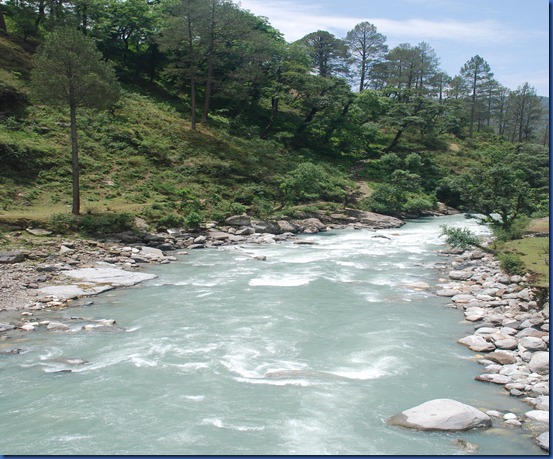 Uttranchal is gods own breadth. It has manifested itself through the green unspoilt hills, the deep ravines cut by the clouds and the rivers flowing in between them. The deep serenity of the animals residing everywhere in between and the simple human beings who inhabit the deep unknown abound.

Uttranchal is where I could find my end. And I am quite sure of the utter knowledge of ends. Its where there is power, and there is energy circulating from the feet of the holy himalayas.

Govind national park is close to uttarkashi. It still remains utterly unspoilt and almost hidden to outside intruding forces. Its very un-inhabitable terrain and the people here are a source of strength to the enduring human and divine will and spirit.

Though formed young and in its nascent stages, the national park is perhaps one of the richest in diverse variety of florae and faunae. Its fabled to be the place where the hindu god hanuman flies to get the divine life giving herb called ‘sanjeevni’ to revive his master lakshman (the brother of divine man god Ram in hindu mythology).

The area is quite prone to downpour and landslide, and when I visited it was not very different. the roads are extremely motor unfriendly and only a four by four or a mahindra jeep can tread here. The locals are cut of from the world, and unless one has a satellite phone (or in some places a bsnl), you cannot communicate with the outside world. The place due to its extreme solitude is also haven to people who want to grow narcotics or such (told to me by loads of forest officers-because this is an extreme cause of concern for the local authorities).

Most people here are illiterate and are bound to either farming or joining the army to get a pay. The place is where yamuna officially starts and many pilgrims make way to trek to yamunotri, though when i was there, most people who had gone to visit the place where stranded due to heavy downpour.

Local legends and belief in mountain power is rampant. There are cases of black magic performed on each other regularly and I don’t quite concede its due to the low level of literacy which has led people to tread onto such paths. The mountain air and atmosphere itself is quite ethereal, even to a ‘logical’ person in any aspect. when he/she enters such an atmosphere… there is a certain understanding that human knowledge and comphension has never been able to pierce what mother nature knows, what the hills and the trees and the rivers know. For they have traversed unceasingly even while standing in a single place. They have flown through endless miles, while shimmering at the same place. Its this understanding that the humans on these vast and desolate regions have also known for eons together. They know that there is power here at work, not the power to kill, but to nurture and create. To make one whole by being and not just doing. This understanding of the unknown and perhaps even the unknowable is what these humans try to use to their advantage albeit unfortunately against each other, and for petty gain.

I spent a week here in solitude, often not speaking at all, and eating very less. There are no restaurants or fancy tourist places to visit here. there is only solitude and simplicity at its best. I read and meditated and cleared my head of the garbage which the city brought to fore (over and again as often as one lives in one). The mendicants life in and near uttarkashi was not bad at all, if i might say so. (I have read about many saints who have wandered and spent their lives regaining themselves amidst these hills and quiet valleys in peaceful meditation). And I was not awed at why they did so, it was simple and clear, the life led amidst humans could only take one so far in the path of evolution. It could only bring so much understanding of our states and the environment in which we were bred. The true knowledge and wisdom of life is amidst nature and its bounty, some of it dangerous to the body and most of it nurturing it. The understanding that even a grain of the holy earth and the sky contained infinite consciousness, if not in the form of bodily life; then in the form of mother nature/earths power was true and abundant in these hills in and around uttarkashi.

Some one must make us understand, and I am thoroughly sick and tired of it. I feel alone sometimes, that no other human being is able to understand how completely full of ourselves we are. We are not god’s grand design, and yet we behave as if we are. We merrily destroy what has taken eons to create and sustain without a single care. I am not saying that we should change, I say that we must see change towards nature and being with nature as an option. Our generation has never even witnessed what nature could be like. How beautiful and life giving it truly is. We think malls and shopping centers give us our life. No how much we underestimate our true potential. Our true NEED for the wild.

And I completely assure you, out of the many many many trekking routes to kunds and peaks there are in govind national park, pick one plan an outing. not a picnic. Just head out and walk up and down, meander around and ask for nothing. Oh you will receive everything and in oh so so plenty!