The central part of India – called Deccan plateau – a flatbed with few high rising hillocks is one of the prettiest and perhaps underexplored parts of the country (cause well its so accessible, no one bothers visiting it). Being close to Hyderabad, had an opportunity to drive down 150 odd km to the former capital of kakatiyas – Warangal. Now in telengana district and laid to ruins, the place in former days was the seat of human power and surrounded by thick semi arid forests of lore.

Visiting the beautiful old Jain temple on the way (dedicated to Lord neminath and adinath) with a stopover, finally reached Warangal on a sultry hot day (pre-monsoons Indian subcontinent is one pile of sweat). Put up in a government lodge and freshened up to go out and check out the beautiful ruins within the city. Could see the thousand pillared temple and other artefacts (but none of them looked really glorious to be frank – especially compared to other parts of fame in India); and before I knew it – it was evening time.

Headed to the the large (and perhaps man made lake) called Durgam Cheruvu – where on its banks lies the beautiful and powerful shakti pith for mother goddess – patron goddess of Warangal and kings. The deity looked so immense and beautiful, I was really without any words; one of the largest deities in size I have seen; covered in vermillion and yellow sari. She looked divine and powerful. Saw that in front of her there is a small Shri Yantra – and it struck me that perhaps Adi shankara would have been there – to install the same. Checked with the temple priest and he confirmed that it was not perhaps adi but one of the shankaracharya’s and currently the temple was overseen by adi shankaracharya. 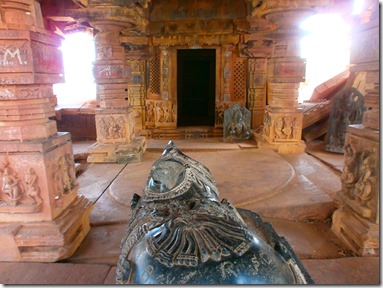 Spent the evening twilight in peace and some meditation (albeit with the mosquito biting furiously). My mother and I felt very happy – and I particularly that I was with my own mother in a power place witnessing a beautiful sunset on the lake. We saw many a fisher folk on the lake – working together to try to net – to catch some fishes (but I really couldn’t see any one of them get any – perhaps cause they were laying the nets – or perhaps they were all drunk and there were no fishes in the lake!)

Had an early local dinner at our hotel (cause Warangal is really not well known for any tourist amenities – like hotels/restaurants etc). The food was spicy telugu rice material (as this area is mainly non-vegetarian and I am not!) and I gulped it down with loads of water and went for an early night’s rest.

Spent the next day travelling to close by lakes of lore – first visiting the very famous Ramappa temple – which is one stand alone temple very far inside and away from Warangal. The temple was of great importance in the past and the black marble idols looked glorious (even today ramappa is the host for famous dance festivals in the region; as it was in the distant past during kakatiya dynasty’s rule)

The temple is in ruins – and it looked initially like cause of an earthquake (it was confirmed by the priests that invasion after invasion and an earthquake and of course the unmentioned neglect of the locals was the reason). It was a hot day but still could spend time to walk barefoot and check out the various compartments within the temple premise before packing off and moving another 20km in our car to see the ramappa lake. The lake is humongous – and a forest lake lodge made by government stands for folks who want to stay there – the place looked pristine but like a ghost town – no one was living there – and I really wouldn't say its the safest vacation getaways – with the naxal and unemployment influence. No one was inhabiting any of the 10 huge beautiful lodges on the banks of the lake – and even the restaurant was barren.

We saw a beautiful ruined temple on one its banks and I spent time to see what the interior looked like – it was a smaller replica of the ramappa temple – same style of sanctum – even the gandharvas and idols mapped on the stone pillars were same! All in ruins, I was tempted to take a small souvenir for myself – but remembered that these are objects and experiences of blessings and curses. Better to be left unto themselves. Walked around the back of the temple – and saw a wonderful grand reservoir – where water was flowing nay gushing out at incredible speed from the lake – perhaps a dam, for the water to be pushed into a particular direction. Wonderful to see water flowing at such maddening pace! Chaos amidst perfection. Never to be missed i must say! 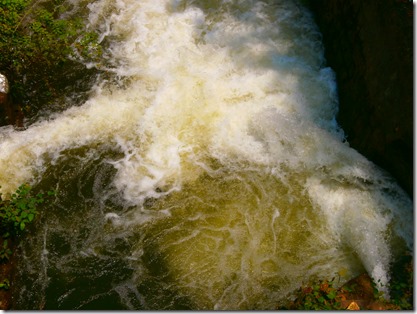 We travelled from here another 40 odd kms to the next biggest lake in the region – called lachnavaram – truly a delight if not for the hostile looking environments and people around – our car was temporarily stopped by little kids – who were imitating their jobless seniors in a mock way – stopping the road with a block and trying to throw stones on the car – and our driver was indeed a bit shaken up. The lake is deep within jungle – and is surrounded by naxal influence. We didn't spend much time – but the lake had a number of small islands in between connected by bridges – the place is well known for migratory birds which come from as far as Siberia during the Indian winters – to nest and chill.

We spent some time in the hot mid day sun appreciating the natural wonder of a lake and started off on the long way back to hyderabad. Journey back uneventful but overall a beautiful getaway at minimum turbulence – to see the once mighty empire fallen unto dust – as usual; as always.