TV is useless, and repulsive; I have not watched tele vision for almost a decade, probably from the time i have started my undergraduation college, i am not interested in sports or serials or comedies or movies on tv. This is not because i am some sort of freak, hell tv is an idiot box and i have spent all my time till the age of 18 watching it, you name it i would have seen it (if it was worth watching in the first place i guess), stuff like test matches, replays and post and pre plays, comedies galore, mystery series and cartoons like x-files or simpsons or batman, and so much of it. Used to recogonize my life more through the idiot box than reality around me (india is poison filled when it comes to witnessing real), watching movies, time and over... or just random stuff, and then one fine day i gave up. I had seen anything and everything which was worth watching on it, and i am thankful too, for the time i left watching the mind disturbance machine, was the exact time world over; people started airing and making real dead beat crap for tv. Its a real shame, but there is something which i still love to watch, though not aired on tv for almost a decade, i have seen M*A*S*H almost my entire life, this awesome kick ass series believe it or not is a canned comedy series made by americans (thats the bizarre part right-americans and funny humor, wtf!). The series is one of the most widely recogonized and aclaimed in the world till date, though it was made somewhere in the mid-80's portraying the american-north-south korean war, where america and 20 odd other countries participated for causing eternal scarring of the korean community, not to mention the permanent seperation of the land into two bitter hating halves.

The comedy series was the post development of the movie by the same name (which was also a huge success), though not entirely as funny, the lead man, alan alda (known as 'hawk-eye' pierce) had been present throughout the entire 11 seasons of the comedy, he and other band of men who play doctors in a Mobile Army Surgical Hospital (MASH), with nurses alongside for the below the belt fun, go to make this series such a delight. I admit that the series would never be AS funny as a brit comedy with the puns and the clever lines, but to its credit this serial had the EXACT - RIGHT mix of humor (situational. Lingual), emotion, adventure and right change of cast at the right time, and ofcourse beautiful sketching of the characters played by very talented and extremely funny cast. I have been hooked on to it, ever since probably 3-4rth standard when it was first aired in star plus channel in india (that time the channel was english and not fucking saas bahu bullshit), and of course all credit to my mother for introducing me to something great.
There is something about bombs, war, blood, death and in between you have these zonked drunk as hell forever doctors who have nothing but sex on mind, who go ahead to combat extreme situations with empathy and humor, the mix as i said earlier was amazing in these episodes, and once you start watching them and conencting with the characters, you are hooked on for life. MASH made my afternoons, and evenings, my popcorn nights and what not. I know its a series havin some 20odd episode per season, but I can relate, remember, and revere every episode, cause its made for some darn good smiling/laughing/madness for me some time or the other.
Alan alda, became famous beyond belief after this series became a hit (almost instantly-after the first season was aired, and still continues to be famous as hell!), not to mention the other characters like jamie farr and so forth, who went on to make their own series after MASH ended.
Just wanted to thank the creators and story makers, the cast and the production units of a very very memorable once in a generation series, which actually went ahead to make a difference, showing the inhumanity of people fighting people, yet casting it in a way so as to make you smile and weep all together.

Peace
ps the opening track of the serial remained the same for 11 straight years, and a very very soul stirring melody indeed. 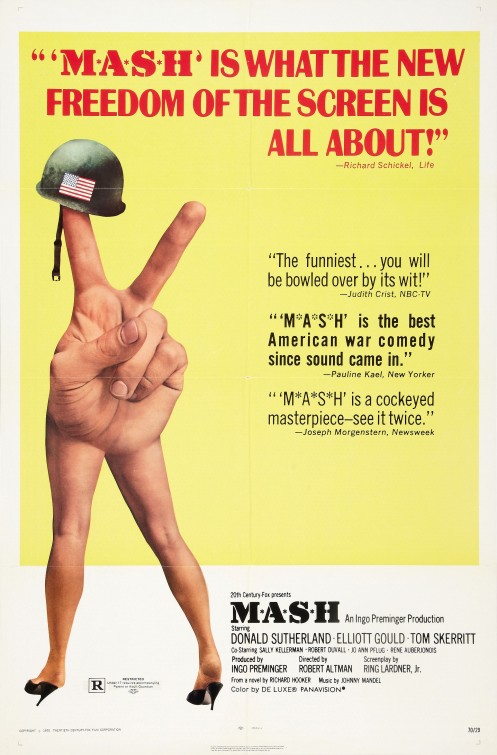