Walk on Till Dawn 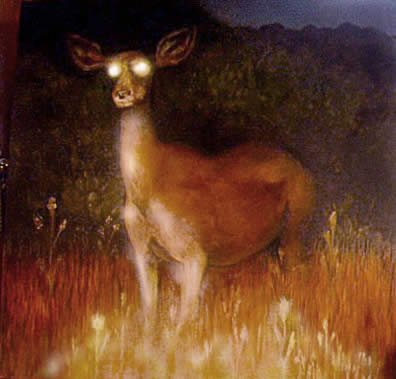 There is a forest near my college.
Oh i go to college, and do try to study but i find that most things which are worth learning are on the outside :)
The forest is deep, dark, dense and endless. This I can vouch for.
The area where International management college is located is in a green part of south delhi, called qutab institutional enclave. This was thick jungle area, belonging to villagers from katwaria-ber sarai. But the government has taken over these huge portions, and the jungle is now called sanjay van- belonging to delhi development authority. The DDA assholes have built some trails- some non cemented paths which go inside this jungle- and some parks cut out in the middle of the jungles at various locations. But you must see it to believe it. the place reeks of haunt unparalleled. I met this place by accident some 2 years back, when I had come exploring with my friends, we soon saw that there was a village temple of the katwaria sarai people here- for guru goraknatha. There is a commercial temple, which is well lit, and where most people venture close to the college (which is at the edge of sanjay van) and then there is the real temple deeper inside the jungle- which is beautiful- many natha sadhus of tradition who have spent their life in these places are buried in the actual goraknatha temple. Goraknatha is the disciple of matsyendranatha, he is the original guru of natha/kanpatha tradition, and he is intense power. I always pray to his shakti, when I enter his land, ofcourse it is his land, where his power has been and still is.

I have ventured many times deep deep inside this insane forest, with my friends (never alone). The place is haunted, the trees here have an insane edge at night, especially during amavasya- which was the last time (this month) when i entered this blessed place.
The path is long winding, and very very silent, you may find people on the way, but never at night- there are multitudes of peacocks/hens, as well as nilgai and deer, I have seen beautiful stags with amazing horns, in the periphery of the jungle (on the outskirts itself) - which is such a surreal sight to witness, in a fuck pot hole like delhi.
This is the special time of navratri, and the nine nights began with amalaya amavasya- the special time of the year where the ancestral spirits enter the human realm- on this night I came to the temple in a special mood, with two of my companions, to peer inside deeper.
There are many roads which lead inside, some of them go all the way towards vasanth vihar side-which I have walked at night (some 8-10 km stretch of pure ecstacy). There is another route which we decided to take on this dark night, towards the left into the unknown. We had but one phone with a torch light (which came in very very handy indeed), we start walking and suddenly everything goes darker than usual, the undergrowth is very thick on these paths, yet we continue on the way, we walk from something around 12 at night to 4 in the morning, the path becomes narrow at times, and is broad enough to carry cars at some other points, the path is winding and there are many strange noises which we get to hear every other moment, one of my friends is used to this place as i am, but the other one is a newcomer, and is indeed nervous about human/animal intrusion in this place, i reconcile him- telling him that this is holy land, land of power, and if our actions are actions of power, then no harm shall accrue on us, if on the other hand, we remain confused, and act in haste or fail to act at all- then yes, this is and will be our graveyard.
We head towards the left, I dont know what direction it is, cause neither the moon nor the sun is there to guide us. We reach many crossroads, which lead to smaller inroads, but in pitch darkness, we stick to the so called "main" path. Walking continuously, I know what we are headed towards, though I don't know the same for my companions, but I am sure they have a clue. We are to face with something from the twilight zone, that was also a series by the same name, the energy levels making inroads to this world, and yes we are/were/will be hunting for it.

At four in the morning, we have exhausted our fuels, our energy drinks, our water, our sight, and of course our mind. The delhi skies emit a yellow haze, but the darkness is too strong for us to make use of this peripheral light, we reach a summit, a small hillock, and a single tree to give us night shade. Resting, we decide whether to move ahead or back, the path has been desolate, and we haven't seen anything unfolding in the bushes yet. The legs have become weary, yet it is twilight time, i am to remind myself, we head forward without much hesitation,
The path moves haywire, and there is a prominant cross road, a road of recoganizable dimensions heading way inside the jungle, we decide to take it, we haven't yet and it has been 3 hours odd since we began the walk.
The path is solid, a car can move on it, and yet we float on it, we reach a smaller interior cross road, there is a weird light, and soon i figure what that is, its not a light at all! its fog, setting in. the haze has a light of its own, now that i recollect, it skipped me completely that this couldn't have been an ordinary fog, the shimmer... we all felt suddenly weird, the location was even more remote than the path we had been traversing till now, and it definitely was deeper inside the void. We see a sudden shift of shadow, its an animal and its somewhere 100 ft in front of us, moving in this weird ass fog, I am the last to spot it correctly due to my cylindrical and spherical combination trip. The animal moves on the road in front of us, and shifts into the other side of the undergrowth, and then its gone. We aren't able to spot it, and that freaks us, perhaps the time of the morning and the mental state, and perhaps hearing about stray leopards all night long (mostly from my stupid mouth ) makes us turn around, and we start moving backward, we still are trying to spot what that is, but it never returns (or perhaps never left). We have seen some weird things inside this thick quiet jungle in the heart of south delhi, and its always marks of power, and we didn't have enough of it this amavasya night to confront the magical pass.
In many civilizations, an animal, like a deer-leopard-tiger-bull are symbols of power, the concept being that in the night, many a time its not these animals which are moving, but entities of power which take on this form. Their vision, and their meet is indeed a power journey. Something worth dying for.

The path is only long and weary when you are yearning,
when there is no goal, all illusion passes on.
Respite despite mortal fright.