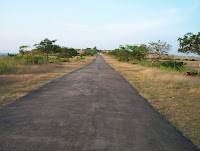 I took a kavadi recently up a hill. and it brought me never ending joy.
The setting is panani. Near kodaikanal hills (which are around 50 kms from there). Panani lies in the southern state of tamilnadu. I travelled from chennai to a place called erod; from where I was to goto panani the next day; needless to say while travelling to spiritual sights I was accompanying the civa-shakti couple par excellence (my folks !).
Most people would have not heard of erod; I had ( I dont know how-not that I know anyone from there). We reached erod late at night and the road trip had nearly killed us due to exhaustion.
The roads in TN are amazing; thanks to the last transport minister who happened to be from TN. The scenery as expected in rural areas of india are beautiful to say the least. The roads wind up and down and all around and you get to see the power places if you scan while driving with extreme caution.
Erod being a very small yet old town, boasted of a pretty big town square as well as many cheesy hotels, we had booked the best place in town for the night and it was pretty wallet friendly. That didnt mean the room was really upto mark compared to city hotels. yet it was the best and we were too tired to notice. No food available and so we make did with some basic stuff for the night.
We slept peaceful.
come morning and we took out to the road once more to reach panani which was around 30-40 kilometres from there.
Panani is one of the six hills in TN which are dedicated for lord Muruga. or kartikeya. he is the older son of civa-shakti union. He is adept at astrology; boasts of infinite beauty and wisdom. He is a andi. Meaning that he is a sadhu. shaved hair and always seeking solitude (hence the mountains). He is a power by himself. He is also the guru of his own father; learning the wisdom of the mystic word Om. He was the one who teaches the lord civa himself... his own father.
Panani is also the place where lord siddha boganatha, or as he is kindly referred Bogar resides in living samadhi. He is present under a special linga (whose constituents I forgot) in a small cave like structure outside Kartikeya sanctum. Bogar is very old, one of the oldest siddhas of India. He is the great guru of siddha baba Naga raja. He is the one who had come to panani and made the idol of lord kartikeya here. The idol is not stone, instead it is made of what is called Nava-Pasha. Nine poisons to be more precise. The real constituents by the way are till date not known; for a majority of the experiments done on the residual contents of the abhishek products from the idol through spectral analysis have never yielded any elements of the idol. The idol is small, around 5 feet perhaps in length, and in this place the lord is andi- he comes to this place supposedly when there is a fight between him and his folks regarding a test which his parents ask him and his brother ganesha to undergo. The test was simple, the two sons had to go around the world three times, and whoever went fastest would win the apple of knowledge (or something to that effect).
Lord ganesha being a cute little elephant went around his folks three times acknowledging that the whole world to him meant only his parents, and lord kartikeya taking the task literally sat on his vehicle (which is a beautiful peacock) and went around the world. When he came back he saw that lord ganesha had already eaten the fruit. Infuriated he leaves the world in a fit, and shaves his head, leaves his ornaments and clothes and becomes a mendicant. he comes here; to panani where he resided on top of this pretty little hill and does penance; meditation for enlightenment.

We reach panani in the middle of the day, the town is biggish, and ofcourse due to the insurgence of devotees at all times of the year, it is mostly a temple town. there is a beautiful heart shaped lake in the city near the hill as well. I had only wished for one thing when I went to see the lord, that I might have some peace while seeing him, that i might not be hurled away from his presence due to the sheer magnitude of crowds of people.
And I have never been disappointed when i ask the lord. There was not a single soul in sight, mind you that this town hosts days and nights where lakhs upon lakhs of people piled upon each other come to see the lord for a minute second or even less.
This was a miracle by itself. I take up a kavadi from a shop and take off my shirt. This is a milk kavadi, bathing the lord in milk would be awesome my heart resounds out loud!
There are around 400 or more steps to be climbed and the heat is on. The steps are hot yet the lord keeps the strength that I dont even feel them. My father keeps me company and my mother takes up the easier way to come up using a udhan kathola (flying saucer ;) )
We reach up and we take up a ticket which by chance and by amazing luck lets us see the lord while his afternoon abhishek takes place for a good half hour. I can see well and i never let the kavadi down. I want to thank the presence for everything this life and this being called I is.
For it is I and the lord which finally make up this life and its experiences and its results and Its being. So thank full ness in full.
I become calm and loving in the presence of andi. The eternal sadhu, teaching the ways of detachment and love at once. That all things are transitory and constant at once. That time will stand still and disappear to the ones who stand all ways before the lord kartikeya.

A kavadi is an ablution to the lord. A state of giving and receiving at once. A state where one is at peace. That state is always present. That state is the always given present.

Thanks Ego Kornus, please go ahead and share as per your liking! Peace