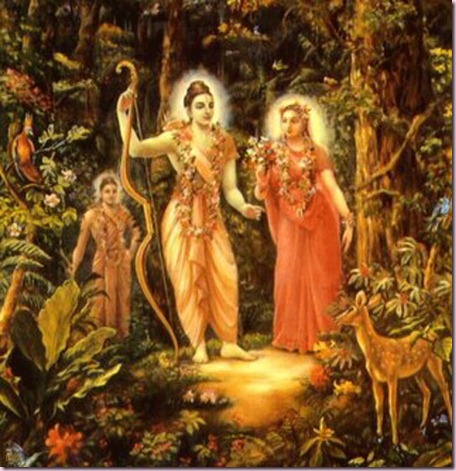 Not many people understand what the ramayana is; as in there are infinite ways to express the story of the moral-man fighting the ten headed ego bloated super-human for a person he loved. But can things be really that simple? As in, what was the story relating to in the first place? Some say that it was about how there was a divine inter-stellar war held on earth, millennia ago, where “god” takes birth as a human archer. He is exiled and lives in the forests/jungles like a hermit. And then he goes ahead to fight a guy who lives on some other shore, who steals his wife!?

It is one hell of a story, and it tries to encapsulate all the personality traits that a man of honor, a warrior and a price should have. After all, these are what stories are here for. So that there is learning and unlearning at the same time;

But I still sense, that there is more to the story; one thing with all the Indian stories is that they are never to be taken at face value, and i mean not in the sense of learning something new, but each and every experience accounted for is for the purpose of rationally showing something to the apprentice.

Rama is a man, who is a sage; who is a saint, who is a warrior (the imagery of warrior is paramount in this story), his wife is nothing and no one other than his personal energy-his shakti- his redemption goddess sita.

Sita is now “stolen” by another adept, ravana- who at times is said to be one of the greatest sages of the time. He was devout; just as rama was. But his ego took pride, did not take heed. That was the downfall of this story as well.

Energy sharing is an impossible concept even for sages? And that is the most disturbing lesson i learn from this story, it is not a conquer over evil or some shit like that, for its known that ravana’s only fault was that he was proud. He was not humble. He took his power to his head. But that is not really evil, its just ignorance. There is a difference; he did not have malign intentions, his kingdom fared well and it is not explicitly stated anywhere that he destroyed anything on the mainland India.

The only reason was that sita was stolen, took against her will? Or was this a fight between the will of two siddhas, two men (gods) who wanted power/energy at their beckoning.

What is to make me believe that lord rama was the rightful controller of this power? When she finally comes to him, he asks whether she is still virgin pure, if she is still his, this was his downfall here as well, as he let his ego, separate itself from this pure divine power (feminine), and attack this energy now returned.

Sita does not take kindly to such ego-istical accusations, and in the end she returns to her mother (her mother is called-> bhu devi/goddess of the earth). This is not by any coincidence, for the serpent energy of every adept- the kundalini’s home is the base centre in the human- the bottom of the spine known as the chakra muladhara which is also known as the earth center (ruled by the earth element). She returns back to where she was raised from and the great story of the warrior ends.

So from such a small instance I can draw alternate conclusions to the story of the fight between good and evil supposedly. For this is a surety, there is no good and evil in Indian mythologies. They are all the time trying to prove the rational way of reaching the divine through esoteric symbols and stories. These stories are perhaps more tantric than one realizes. Generally orthodox Hindus would scoff at this statement, but in reality almost all these stories are over generations made into something with connotations for householders while in reality they are tribalastic and tantric at core.

I am a great devout of Rama, for the word rama itself is a mantra for one of the centres above the muladhara- the manipura chakra which rules the stomach region and is also used to convert digestive energy to spiritual energy; its mantra is also Ra-Ma. This is supposed to raise the energy and generate heat in the body. and the word is such.

On days not so fine, i could also independently conclude that during the epic ramayana- rama the warrior prince was trying to raise the energy to manipura while his own ego took over 10 heads and tried to control the energy sita- this caused the epic intrensic fight within rama, which rama at the end perhaps could not win, even with ravana relinquished, his heart yet not pure could not make sita within him sit next to him on the throne.

A warrior’s life; as I see is very difficult. Its more difficult than most imagine. Ramayana could express such a story as well.

Rama was such a person to me, someone who remained humble and took his energy at par with him, not to his head. But there was something missing still cause the power decided to part from him; or it verily might be that the energy might have fulfilled its work within the warrior rama. She might have ascended all the way to the head, where one final dual was to ensue between rama-ravana, before it was ended.