AT THE MERCY OF THE EAGLE

The sorcerers visualize the world, in such subtle dreams. It bends and becomes everyone’s reality. 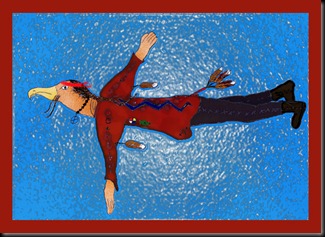 Here and now, the shaman is a special warrior. He is the band leader of a bunch of fools; fools for they are all risking their fragile and nimble lives to enter something which might not exist. They are true masters of humble existence.

The nag’ual takes the band into altered states. he guides them and leaves them at the mercy of his allies. The allies, all worth being reckoned with, prove their metal and teach lessons invaluable to the band of hunters and warriors alike. They sweat and toil and many might go insane with the extreme will and effort which the process requires of them.

The will is forged in fire. The fire which is burning from within us all, and everywhere abound. The fire which is consuming us day in and out and making us forge cages with our thoughts. Thoughts which then become barriers for the very same fire to rage on. Soon for most of us, the fire slows down. and dies.

The nag’ual is crazy, he understands that this is not how he was forged. His thoughts do not trouble him anymore. They do not lead him astray to any other plane. He is intent and content, both at the same time. The will is directed and free… such an intense and life changing state to be in.

The nag’ual has but one choice. Well then it is really not a choice at all.. The only way to live, before dying is at the mouth of the eagle. The eagle, fiery and formidable is the entire existence; unlabelled (though for convenience visualized as a holy bird), and powerful is consuming all life through its mouth, consuming sheer energy and then through its incredible wings, again spewing forth this to form endless realms; dimensions and consciousness alive. The eagle is not consciousness, it is extremely dangerous is all what the nag’ual knows. For now he has realized his life’s calling… to be as close to this eagle.. This state of being where even one trigger might lead him to go insane and die. To never be the same again… and yet approach this state and remain so close to it, that it will alter him every single moment. Or just the moment which counts. The only moment which is present; here and now.

The nag’ual is weary and extremely hysterical. He is both joyful and solemn. Such a fine state for a human being to be in. Such potential now shown with utter abandon. There must be something special in him for sure. The band questions him not and follows him with faith. The same faith which the eagle consumes like corn…. The same energy which they all possess is what the eagle consumes as its most delicious food… the refined conscious energy of the universe which the eagle has created in the first place. There is careful paths to be tread..

The nag’ual pushes each one of his friends into the fiery pit of the eagle’s endless raging mouth. Some are too attracted at the endless energy and wisdom and power and knowledge; that they look not here and there even once, before jumping in…attracted to a powerful magnet pulling like a black hole- all energy of IS.

Some do as the courageous nag’ual had asked them to… They stay just at the periphery, almost as if there is resonance of some sort which keeps them at bay, they remain at the eagle’s mouth for eons together, never fading or dying away.. their eternal youth kept alive through the endless energies pouring through them from all corners of this visible universe and beyond. Only when they wish to, will to, and choose to; shall they jump into the great unknown. Never to be the same again. Never to know this and that as they once did… to repeat the eagle’s play once again..

Till then they remain perched; ironically on the birds mouth, with the giant nag’ual who has been there ever since never. He remains at the gates, testing and seeing beyond the mouth and waiting sincerely and with greater faith… for others who shall see as he does to.