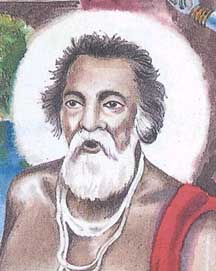 Vamakhepa, is a man-saint-god of the power place of cin-tara, Tarapith!
Vamakhepa was born in 1837 in tarpith and his father named his such, which meant the mad saint. And he as everyone of us suited his name to the letter. Bamakepa became the greatest saint of tarapith, born to serve jai tara in whichever way his mind-body accepted to do.
Bamakepa became the priest of tarapith, and he roamed the nearby cremation ground at will serving it and sharing his temple food with the animals there. Taking nothing in return, just chanting jai tara's name.
As with vama and any goddess worshipper its difficult nay impossible to predict the moods with which he/she worships jai tara ma.
At times the mad saint would curse tara ma, comparing her to a earthly woman, a prostitute cursing how she had dragged him to this plane and to this situation.
and at others he would pray and pray and praise till he brought on the situation of trance once again.
His only redemption was Jai Tara~
When he was thrown out from the temple and kicked and brutalized, the queen of tarapith temple who owned the temple had the dream in which ma tara was leaving the place sad, saying shes going back to kailasa; that she was insulted because her true true lover was insulted and there was no place for her. How could the mother eat when her son was had not eaten.. ?
He was brought back to roam the grounds free. Vamakepa was the true renuncient, the true bhairava, the true yogi of the left hand path of ma. He lived and was the left hand mad path to devi.
Bama was truly the lord god civa in his earthly rupa, ma in tarapith is seen to breast feed lord civa, because here in this place lord tarakanatha is actually the son of the mother. Isnt it the truth that ma tara is the mother of this whole universe, and here she is actually the mother of her partner-consciousness. She lets civa suckle to let the poison of hala~ahala have no use. She is truly jagat ma here. Jai Tara Ma~
There is a story in which bama is tested by a man, who wants to know whether he is fake so he hires a prostitute to seduce bama, and show he really is not a saint.
The prostitute comes and bama even more fiercly identifies her as ma, and he starts suckling on her breasts as a child would towards her mother. For you see there is no distinction in bama's head that mother is here and now, she is all that is. no where in this world is a love so powerful as in the heart of bamakepa. He is the last ansha which is away from mother tara. He is saved till then for he chooses to love ma. The very moment the love is complete, he leaves all. becomes the heart and the third eye of ma tara.
Tara in Tarapith is the shakti-pith where the third eye. the very source of consciousness is seen to fall. Here the lord civa is a part of tara ma herself. there is no distinction. For consciousness and power are the sanctum of the cremation ground in this place. It is sheer divine. Irish cream ;)
this is an excerpt of what he said once :

"Ma (the Mother goddess) is asleep in the muladhara chakra and should be awakened- if she is not awake, who is there to give one liberation? Only she can do this.... The first sign of the awakening of Kundalini is that the person does not feel satisfied with the ordinary state of life- one gets a great urge within to get over this confinement. The awakening of Kundalini gives men great pleasure, a kind of pleasure that ordinary men never attain ... as you pass through and move from one chakra to another, you feel the manifestations of the varied bhavas of Kundalini Sakti. But what is important, as a result of kundalini Shakti's functions in every chakra, is the kind of bhava it creates, a different bhava in each place, and the feeling of these bhavas brings such a state of bliss that it cannot be described."

Vama kepa worships the akasa-tara. the ether consciousness power vision of mother which is the savior.
Vamakepa remains to be a true shakta worshipper, where his entire being is enveloped in the mother. Where sakti is the only way up and out. There is no other way.
He gave up the body in 1911. In nirvikilpa samadhi. In true style.
Jai Tara Ma~
Jai Tara Ma~
Jai Tara Ma~